Registrarse
Registrarse
Recuperación de contraseña
Recupera tu contraseña
ama ata blogHistory, Historical Linguistics, Archaeology, Genetics, Iruña-Veleia
Registrarse
¡Bienvenido! Ingresa en tu cuenta
Forgot your password? Get help
Política de Privacidad
Recuperación de contraseña
Recupera tu contraseña
Se te ha enviado una contraseña por correo electrónico.
Registrarse / Unirse
ama ata blogHistory, Historical Linguistics, Archaeology, Genetics, Iruña-Veleia
Iruña-VeleiaGrafitosArqueologíainforme NavarroEuskeraEpigrafía
Facebook
Twitter
Inicio Arqueología Is Pytheas Thule found?
Compartir
Facebook
Twitter
WhatsApp
Linkedin
Telegram
Copy URL
ReddIt
Pinterest
Email
Ernst Olav Blakstad
« It seems that the massaliot Pytheas actually was in these regions. He says among what he has written in On the Ocean: « The barbarians pointed out for me on several occacions where the sun goes to bed. For it happens in these regions, that the night is very short, some places two others three hours. So after sunset, it takes only a short while until it rises again»
The text above was written by Geminos around two tousand years ago. This according to Christina Horst Roseman ( Pytheas of Massalia, On the Ocean. Text, translation and commentary, 1994).
This is one of the few remaining fragments from Pytheas book On the Ocean, the book he wrote about his extraordinary voyage from Massalia (Marseilles in France) to Northern Europe around 325 B.C. A book that got lost when the great library in Alexandria was destroyed in 270 A.D.
During the 600 years the book existed nearly 20 known scientist and historians read and used information from the book in their own works and maps. Among these are Erastosthenes (mapping), Hipparkhos (astronomy), Polybios (historian), Stabro (Geography) and Ptolemy (mapping).
These fragments are bits in the puzzle about where Pytheas went on his epic voyage. And the biggest bit in the puzzle is the whereabouts of Thule, the mytic island far north at the edge of sivilization.
Probably is it only the whereabouts of Atlantis that is more discussed?
Pytheas was a great observer/navigator using a “gnomon”for his observations. According to Dieter Lelgeman he observed the latitude of Marseilles with just 4 nautical miles wrong, – an amazing accivement.
There is knowledge that he probably was in Le Youdet in France, Lands End, Isle of Man and Lewis in Britain. But for over two thousand years people have wondered «Where is Thule?», his northern-most stop. Some say Iceland (Cunliffe 2001), some say Norway (Nansen 1911), the Shetlanders say it is Shetland, the Færingers say it is The Faroes and some even say it is Saremaa in The Baltic.
One key question in the search of Thule is “Was Thule inhabited?”
Christina Horst Roseman think so. She writes in her book: “If he had specifically stated that Thoule, as was not inhabitated, Stabro might have been expected to mention this, as it would have provided some support to his own notions about the chilly zone“.
She writes that most of them who refers to “On the Ocean”are critical to what Pytheas reported and called him a liar and sharlatanan. Had he seen the midnight-sun the critics would mentioned it as a big lie., according to Roseman Cunliffe agrees in this last conclution.
But was Thule inhabitated at Pytheas time this rules out Iceland. According to National Museum in Reykjavik there are no archeological evidence of population on Iceland prior to Celtic munks and the Norse Vikings. Also The Faroes would be doubtful.
In 2007 The Technical University of Berlin (TU-Berlin) sent out a press-release, informing about new studies of old greek and roman maps. By using advanced data-technology a science-group had corrected such maps and located between 5 and 6000 old and new geographical places in northern Europe. The science-group was led by Dieter Lelgemann – Professor of geodesy. Lelgeman special area is Greek messures in the antic.
When the first map of Italy was made it was a puzzle of 40 smaller maps, this according to Lelgemann. Different messures in these maps made this map wrong. The study at TU-Berlin corrected these wrongs by using known places (Barcina=Barcelona, Londrium=London, Byssants=Istanbul….) Like this lost places accured.
As a part of this study they also used all knowledge about Thule and concluded that it probably is Smøla (N 63 25, E 008 00) on the West-Coast of Norway.

This new discovery/theory was referred in magazines, newspapers and web-sites in many countries (Germany, France, Spain, Portugal, Chile……)
Professor in history, Einar Østmo at the University of Oslo (UIO) say that the conditions that Pytheas reported from Thule was simular to these in the west-coast of Norway in iron-age. Such as farming herbs, roots, using barns for drying harvest, climate, using honey and barley in making of the norse beer “Mjød” etc.
Østmo is referred in a Norwegian newspaper in 2008.
How well did these German scientists know the ancient history of Smøla? The fact is that there are only a few islands on the Norwegian coast with a simular rich history.
It seems to be a «Bulls-eye.

Ancient history of Smøla in brief

When the ice-cap withdrew after the last ice-age it was the west-coast of Norway that was first settled. Hunters, collectors and fishermen followed the ice-free coast looking for reindeer, sea-mammels, mussels and fish. The warm Gulf-stream «hits» the norwegian coast at Stadt (West-Cape) and even today this area has the warmest seawater and therefore is best for fish-farming.
The heavy ice had pressed the land down and slowly the land started to rise (icostacy). Geologs reckon that Smøla was around 70 meters «lower» by the end of the ice-age. This means that only one small part of Smøla was above water at that time, – the top of a hill today called Ramdalshaugen at Kuli.
By 6000 BC «Smøla» had raised about 40 meters and it was around this time the first human being placed his foot on Smøla.
In 1909 archeologist Anders Nummedal made his first find of what he later called «Fosnakulturen», the Fosna-culture. Fosna is the old name of the town of Kristiansund, the place where he made his first find. Nummedal also found stone-age places and finds at Smøla. 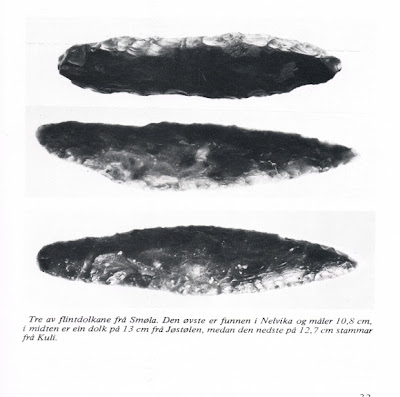 The stone-axe is a beutiful piece of work. I reckon would have taken some time to make the perfect hole.

There are a few certain bronze-age finds on Smøla, historians reckon that stone-tools still were in use since the sivilization was not advanced. Therefore it is difficult to know witch period such single-finds is from.
But there is one remarkable find done in 1922: Whist plowing a farmer found a bark-basket deep in the moor, 2 meters deep.

The basket was intact when it was found, but was damaged when it was lifted out of the moor.

In 2006 a stipendiate at NTNU in Trondheim dated the basket to be from 1520-1440 BC by using c14-dating.
Nearly all finds done at Smøla are located at NTNU-museum in Trondheim.
At the north end of Kuli at Smøla there is a cult-stone, a ”Pikk-stein”– a “cock-stone”. (mind my language). 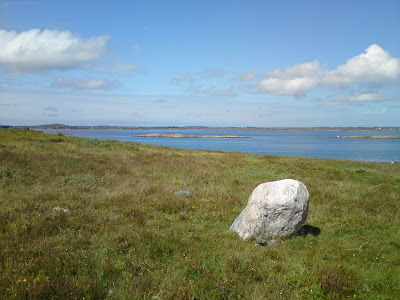 Photo of cult-stone at Kuli, Smøla due north
It is one out of 52 such in Norway and the historians consider them as a part of a sun-cult from late bronze-age/early iron-age. Around the main stone there are smaller white stones.
Could these smaller stones have been used for celebrating midsummer og mid-winter in observing the sun?
There has not been any organized escarvations at Smøla after Nummedal was looking for stone-age finds in early 20thcentury (at 20-40 meters above todays sea-level). Nearly all later finds are done by farmers whilst plowing and digging ditches, just by pure luck.
When the star-grave from the iron-age was found at Edøy in 2006 it was also by pure luck.
Prior of building a culture-center a rare star-grave was found in 2006, at the end of a «test-ditch». There was no investigation in forehand, so had the ditch been selected 5 meters to the side the grave would not have been found. It was used one digging-machine and it was superviced by one-1 acheolog !!!
This grave is now a Norwegian national heritage.
There are only a few such star-graves in Scandinavia and all of them lies close to a «Hov»- the pre-christian house for the old gods (Odin, Thor,Frøya, Njord…..) Probably there was a such a «Hov»where the church is today.
Historians believe that these three-armed stars symbolizes the roots of «Yggdrasil»- the «World-tree». The tree reaching from heaven down to the three norse worlds: «Åsgard» , «Nivilheim» and «Jotunheim».
Tolkien was much inspired of these elements of norse mythologi when writing «Lord of the Rings».
The church were cunning when christening Norway, by mixing the old and new religion. Rebuilding «hovs» to churches or building new churches on top of “Hovs”. Nearly all Norwegian Christmas-traditions origins from «Åsatru»– the old religion.

From Viking-age there is the find of runic-stone “Kulisteinen” which use the name Noriki (Norway) for the first time. It also mentions for the first time about the christening of Norway.
This unik runic-stone was in 2012 listed in UNESCO heritage document-list, as the oldest document from Norway.
All these great mentioned finds at Smøla is a strong indication that Smøla was a central place on the Norwegian coast for centuries.

Some aspects about Smøla being Thule:

Edøy had a «Hov» in iron-age and this together with the cult-stone, star-grave and important runic-stone are a strong indication that Edøy/Kuli area at Smøla has been a stronghold for centuries,controlling the Norwegian Coast (as Gibraltar, Bosporus). The area was important for sea-farers. The “Hov”could have been be dedicated to Njord, the god of seafarers? Edøy is the last safe stop before entering the North Sea towards Europe and the first stop when coming back. It is a natural place to stop to after several days at sea. The area also have excellent conditions for docking, not as rocky and wild as the rest of the Norwegian coast.

As a curiosity it can be mentioned that there also is an island called Eiday at The Orcneys, an island similar shaped as Edøy at Smøla. A “eid”is place where the island is narrow.

According to the King Sagas , Snorri Sturlason tells about a fortress in the area. This fortress has never been found. The farmer on the iron-age farm on Edøy has localized a 35 meter stone-wall deep in his field, not far from the above mentioned star-grave and “Hov”.
Could local chiefs have lived here also at Pytheas time? On Kuli there are found a big bronze-age farm.
Snorri also tells in the sagas about celebrating mid-summerin pre-christian times. Was the stone at the north-end of Kuli the local center of this celebration, with its perfect view of the setting sun in the north horizon? And if Pytheas visited Smøla, did he joined the local barbarians in this celebration at this very place?
Like this he could have reported afterwards, according to Geminos/Roseman : « The barbarians pointed out for us on several occations the place where the sun lies down. For it happens, around these places, that the night is extremely short; two hours in some, three in others, so that after the setting, although only a short time has elapsed, the sun straightaway rises again».
According to modern almanac the sun today is below horizon 3 hours and 15 minutes at mid-summer at Smøla. According to Nansen (Northern Mist, 1911) the heeling-angle of the earth changes constantly and Smøla had even shorter «nights» at Pytheas time.
Could it be so elegant and so simple?
Can this be Pytheas Thule?

Will there be found archeological evidence that support the scientists at TU-Berlin?

The ostraka with Egyptianizing hieroglyphs of Iruña-Veleia (by Ulrike Fritz)